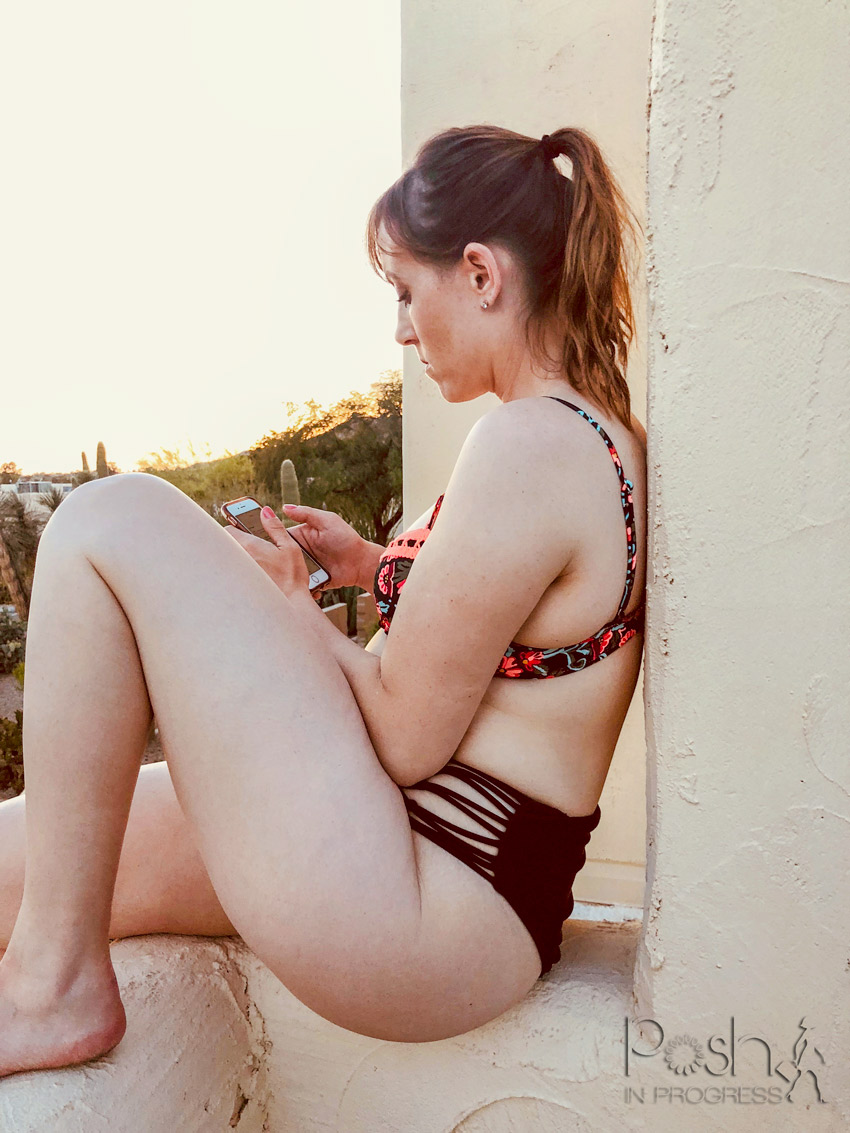 I’ve thought about posting this picture for about two months, but I’ve been afraid. I’m not perfect, it’s not perfect, my body isn’t perfect. Being an ‘influencer’ and in the public eye, so to speak, I often think long (and way too hard) about what I’m going to post. I sensor myself to the point of feeling overwhelmed with what to post next. This isn’t healthy, this isn’t normal, and I really don’t think it’s the way I should use social media. If I’m honest, social media makes me critical of my body, to the point that it’s affected my self esteem.

My hyper-critical nature is not something new. In my 20s, I was a signed model, so I regularly got paid based on how I looked. Although this might sound glamorous, it’s actually the opposite, a lot of times. I had people very bluntly tell me what they thought about how I looked – sometimes good, sometimes not so good. I’ll never forget one time when a casting director said, “what are you? You’re not big enough to be plus sized and you’re not small enough to be a regular model…” I didn’t know what to say. For probably a minute, I just stood there with a dead look on my face and felt like I needed to hide. I went back to my agent, and she demanded I gain 20 pounds. I decided that was the end of modeling for that agency.

When I started blogging five years ago, I knew I’d include fashion and styling shots because I love clothes. It’s one of the main reasons I started the blog. Secretly, my dream job would have been to either work at a fashion magazine or be a fashion designer. Since I didn’t take those paths, blogging the best way for me to connect to those passions without actually giving up a career in academia that I love.

Since blogging allows me many opportunities to model clothes, accessories, and makeup, I often spend way too much time thinking about how I look and the way my body or my face looks in any given picture. I am prone to being obsessive about things as it is, so modeling just makes me even more critical.

I’ve never been overly happy with the way my body looks, I’ve always seen the flaws way louder than the positive attributes. But then something super strange happened earlier this summer. My friend captured this picture of me while I was enjoying a sunset. I had no idea my friend took the photo and later, when they sent it to me, they said “she’s hot”.

Honestly, I was in shock. I didn’t see hot, I only saw flaws. I showed it to a couple of my other friends a few days later and they confirmed what I couldn’t see. One of my girlfriends, who I think has a perfect body, complimented me on my small waist, and curvy hips. She told me she hates how straight her body is and she wishes she had more curves. My other friend told me that if she looked like that in a photo she’d post it for the world to see.

All of these conversations got me thinking – not only about how I perceive myself but how others perceive themselves. Why are we all so hard on ourselves but our friends can see the good that we can’t? Honestly, these girls love me, so of course they say nice things, but why can they see things I don’t? Why do I narrow in only on the flaws?

There’s no doubt that social media makes me critical of my appearance. It’s impossible not to compare myself to the thousands of other mommy influencers who I perceive as being perfect. In a lot of ways, putting myself in front of the camera, I’m setting myself up for critique. But my inner voice is actually the loudest. Sure, I’m received some troll comments over the years, but my inner critic is definitely the worst.

But the funniest part of it all, many people have told me they think my life is perfect because of the way it appears on social media. Well, it’s definitely not, and I’m definitely not, and I’m learning to be OK with that. I’m going to try to be more accepting of my flaws and maybe even post photos, like this one, that I personally don’t love. I’ve been working on trying to be more body positive, and I’ll just keep trying.

When I have put myself out there more on social media, when I’ve been the most authentic and raw and unfiltered, that’s when I’ve helped other people the most. (Like the time I shared my struggle with breastfeeding and my #metoo story).  So here’s to being more vulnerable and showing the world I’m not perfect. So instead of being so mean to myself, I’m going to try to embrace where I’m at, the beauty and the flaws of it all. It’s actually our flaws that make us special isn’t it?

Looking for other body positive inspiration? Gabi and Sarah are my favorite bloggers who represent all things body positive.