“G, look at you, only 3 months old!” as I showed my daughter one of my favorite pictures of her as a baby.

“Am I Black or White?” she asked, with her big brown eyes staring up at me.

“You’re both honey.” I said, with some hesitation, out of lack of preparedness.

And then I thought about it for a second and I said, “you’re neither, you’re a beautiful shade of brown.”

I am not prepared for this. How do you explain to your four-year-old that Black and White are socially constructed categories that I don’t want to perpetuate? But how do I also acknowledge her multiple identities in a meaningful way while also combatting the negative messages she’s hearing (already) at four.

I consulted a few friends who happen to think about issues of race a lot and they told me to focus on the fact that she is human first, that we are all alike and different and special and unique. They suggested I talk to her about her history, where her mom comes from, where her dad came from.

Armed with much better advice that I came to on my own, probably due to my state of shock, I started the conversation about her ancestry. Since the attention span of a four-year-old is pretty short, she quickly moved on to thinking about some other completely unrelated topic, but I was left feeling like I was not at all prepared.

It nagged at me that night. Who is talking to her about Black and White already? Why does she already have a negative association with Black?

We do not show her images or bring her around situations where she would already be experiencing discrimination, so where is it coming from?

The obvious answer is school. My friend told me not to shield her but rather to prepare her. It does her no good to try to protect her from an inevitable truth – we live in a racist society. OK, I said it.

So how do you prepare an innocent child for this? As an educator, my first thought was books. Thankfully, one of my blogger friends posted this book the very same night this conversation with my daughter occurred. I immediately logged onto Amazon and ordered it for her, along with a couple others (We’re Different. We’re the Same.; Whoever You Are.)

I personally know books are a great way to help kids think through difficult conversations. Plus, I liked the idea of providing her with more books with people with whom my kids can identify.

After I ordered these books, I realized I don’t have many books that feature brown people. I have a few, like the Snowy Day, but not nearly enough. Moving forward, I am going to make a concerted effort to include more diverse book choices. Luckily, my blogger friend suggested this Instagram account, which shares a lot of great books featuring people of color.

The day the books arrived, I acted excited and I told my kids I would read them the books that night. To my delight, my kids actually had one of them at their last school, which made me happy. While we read the books, they didn’t seem any more interested than they normally are when we read books. The thing is, I read to them every night and they absolutely love to read with me, so it’s not like this is a new thing for us. 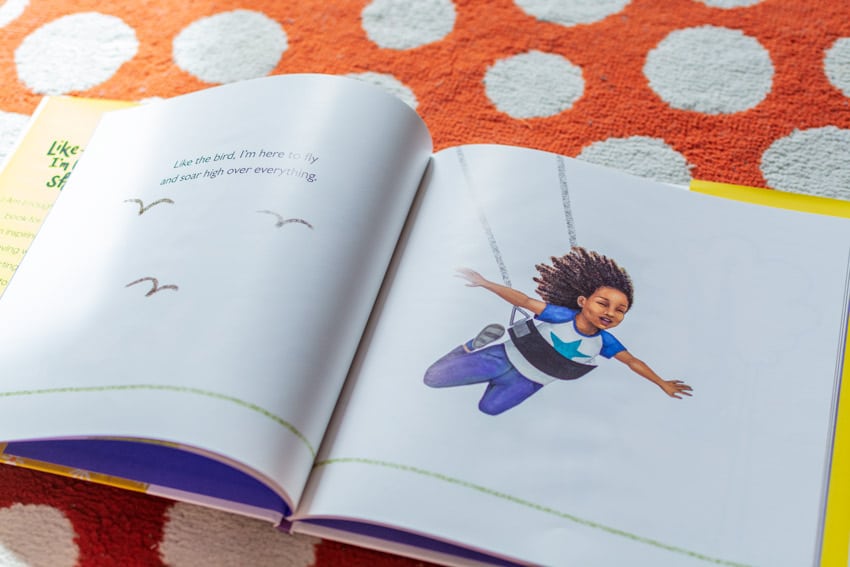 However, the next night, my daughter picked I Am Enough a second night in a row. She even said, “I love that book.” To me, this was a clear victory. She could identify with the girl on the cover and as I read the book, she pointed out things the little girl did that she also did (like their mutual love of swings).

Introducing more diverse books isn’t the ultimate solution, but it’s a good starting point for a four-year-old. I still have a lot of work ahead of me to help my children to build positive identities. I want them to value both of their family histories and I never want them to think they are less than because they are brown. If there is one goal I have in this life, it is to make sure they always love and value themselves and know they are enough.

(Check out my babies when I read to them when they were much younger.)