Thank you, Hilton Hotels, Toyota, San Diego Zoo, and LEGOLAND for Collaborating with us on this story! 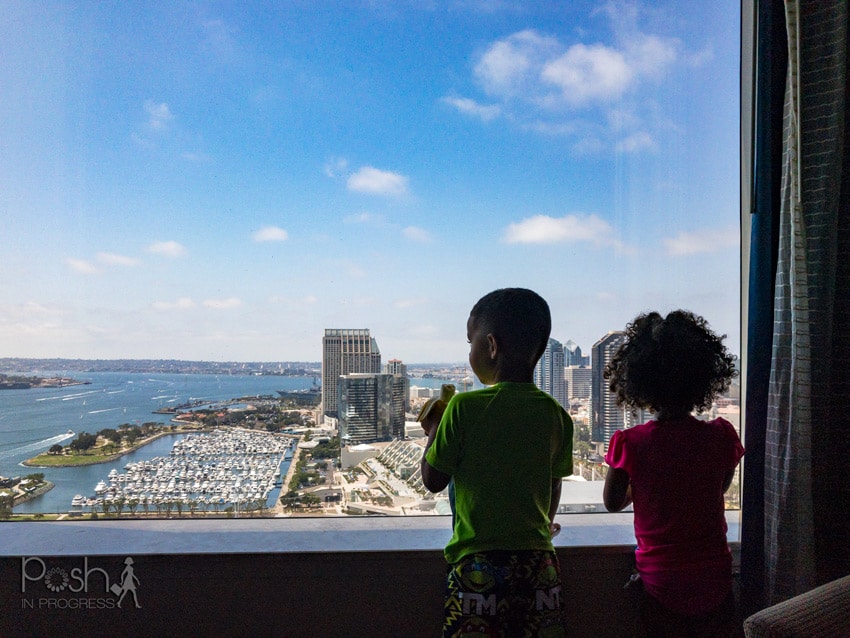 In July, we had the chance to take our kids to southern California for a long weekend. Hilton invited us to check out three of their properties as part of their California Road Trip promotion. We also arranged visits to the San Diego Zoo and LEGOLAND. We were so excited for this trip and the kids talked about it for weeks in advance. However, when it came down to execution, the trip was not as smooth as it should have been. I quickly realized I made a lot of mistakes in planning this trip so I’m sharing the 8 things that I would do differently to ensure the best road trip with kids.

8 Things to Ensure the Best Road Trip with Kids 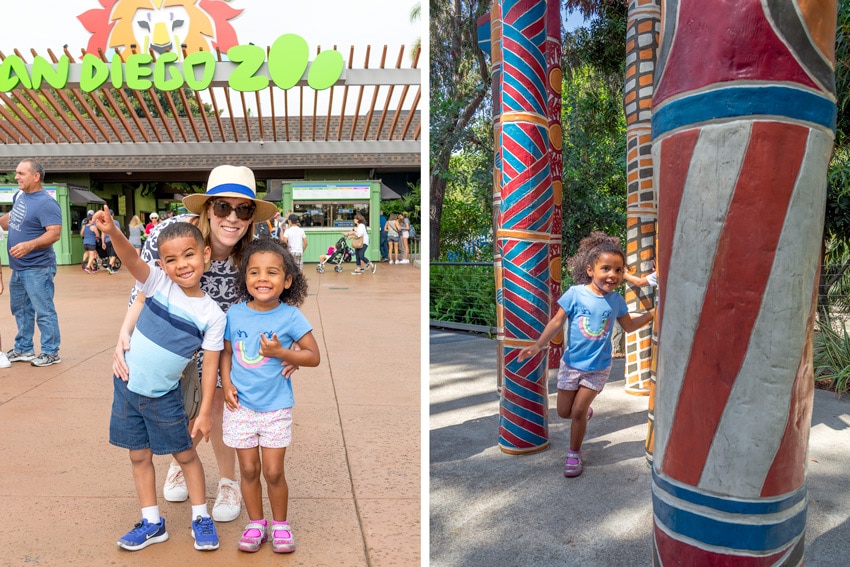 I’m a major planner – probably a bit of an over-planner. That doesn’t always work so well with kids. Having an agenda is good, but trying to cram too many things into a trip, it can be overwhelming for everyone.

On the very first day we arrived in San Diego, I planned for us to go to the San Diego Zoo. That was a bit mistake. Everyone was super tired from the 6-hour drive the day before. We had arrived at our hotel around 10 pm and we were up and ready for the zoo by 9. It was just too much for them.

When we first arrived, the kids were super excited to see all the animals. The first thing they wanted to do was ride on the bus that tours around the zoo. If you haven’t been to the San Diego Zoo, taking that bus is a great way to get a sense of the layout of the zoo and determine what you want to see next. This was one of the first times our kids ever rode on a bus, so they absolutely loved it.

Once we got off the bus, the kids were hungry for a snack and then we wandered to look at some of the animals. Luckily, we had already seen a lot of animals on the bus tour, because our son had a meltdown soon after we finished the snack. It was so disappointing to me that had to leave after only 2 hours because my kids were just too tired and overwhelmed to stay any longer.

If you are going to visit the San Diego Zoo with preschoolers, I’d highly suggest you bring a stroller, or rent one of their strollers, if you want to see the entire grounds. As another option, the bus routes are super convenient and save the little kids from having to walk too much.

2. Be Flexible with Screen Time 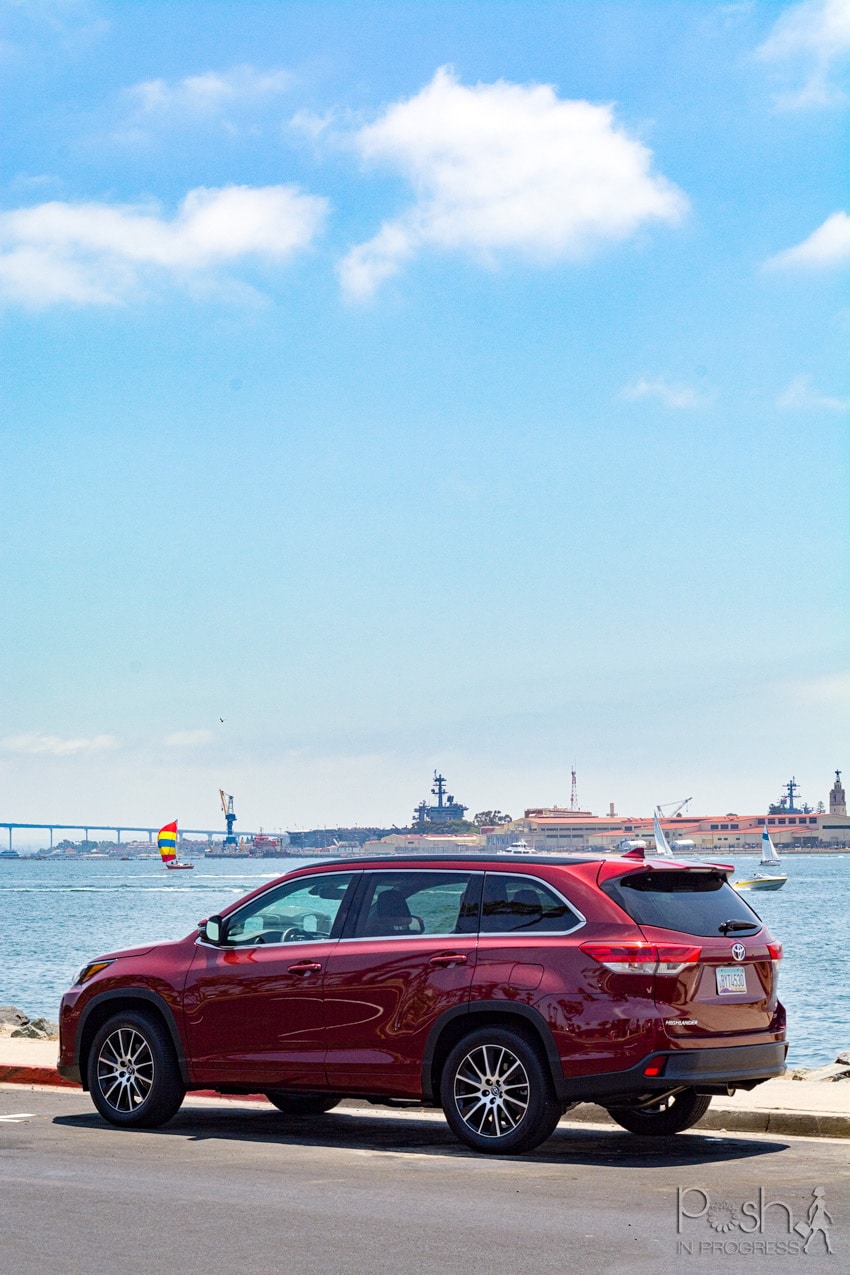 We try to limit our kids to no more than one hour of TV per day. However, on vacation, we made a major exception. To start, we were lucky enough to get to drive the Toyota Highlander with a TV in the back for the kids. They were so well-behaved on the 6-hour drive to/from southern California, and the major reason they were so great is because they got to watch countless shows. The kids also love riding in the Highlander because it sits up so much higher than our car so they can see a lot more scenery.

We also let the kids watch other shows during our stay with Hilton hotels. Hilton has a lot of channels, including Disney Jr. and my kids found some new shows they loved, including the Lion Guard and PJ Masks. Needless to say, the TV saved us a lot of times during the trip. When they were upset or just needed a break, it was a good way to calm them so they could get the rest they needed (and it saved us from a lot of unnecessary fights). Once we got home, we went right back to our 1 hour a day rule and everyone is fine. 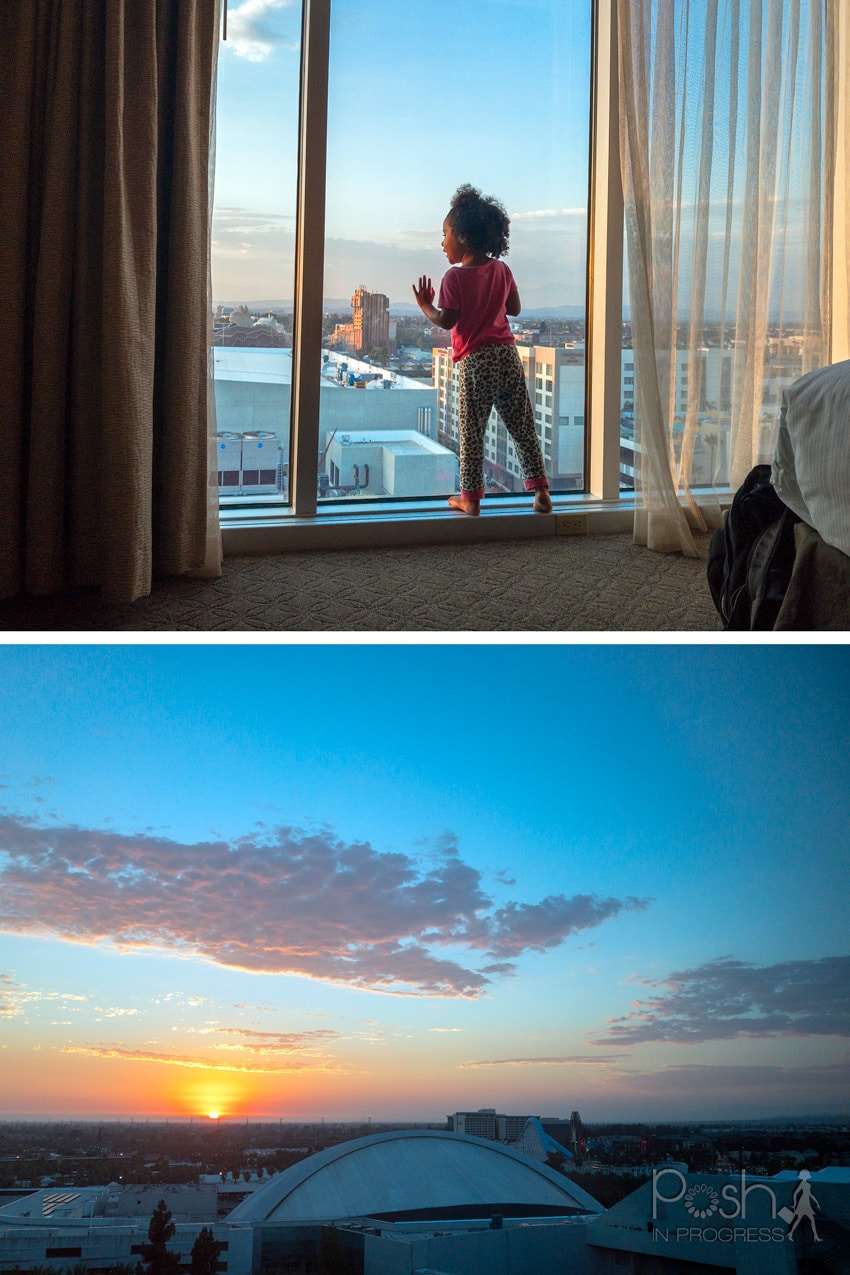 The kids absolutely loved all of our different hotel rooms. We stayed at three different Hilton hotels – at the San Diego Bayfront, at La Jolla Torrey Pines, and at the Anaheim location. All three rooms had really fantastic views that the kids enjoyed. They spent quite a bit of time at the Bayfront just sitting on the ledge overlooking the city and the harbor. They also loved the little patio we had at Torrey Pines so they could eat their snacks and look at the pool down below.  In Anaheim, we also had a view of the pool as well as a view of Disney (I also captured that amazing sunset from our room!).

If you’re heading to California this summer, you should check out the Hilton’s Road Trip promotion. Several of their California hotels are offering special rates as well as other goodies along the way.

4. Schedule Something They Love As Bribery 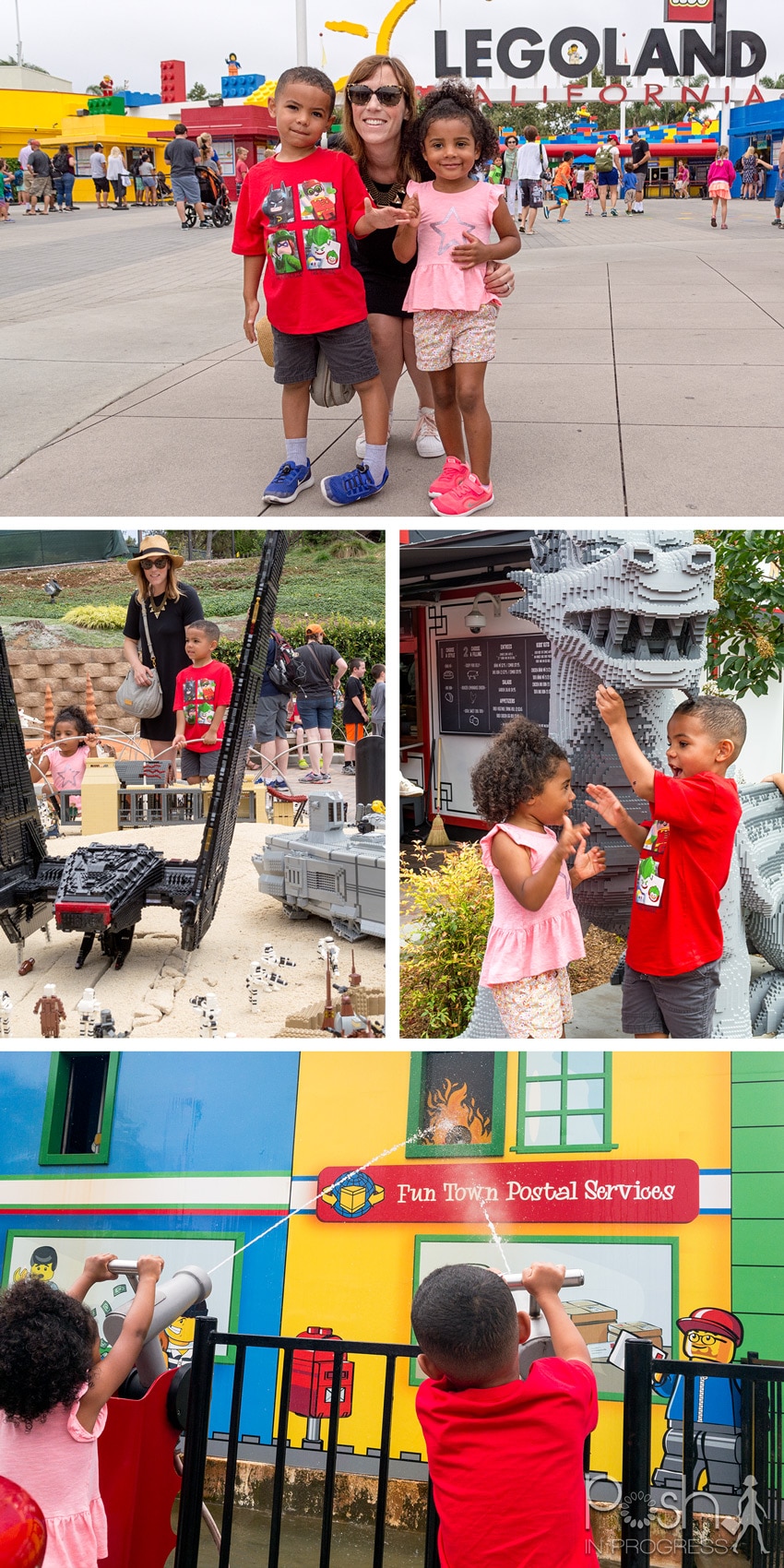 Every time our kids got worked up, we reminded them about the upcoming stop at LEGOLAND. It might not be the most ethical (we were going anyway), but we used it as a carrot to dangle at them every time they threw a fit. “If you don’t behave, we aren’t going to LEGOLAND.” Good or bad, it works. The kids really wanted to go to LEOLAND and they were willing to shape up so they wouldn’t lose out on that experience.

Another reason I think LEGOLAND was such a success was that it was the third day of our trip. By then, they had adjusted to our time in California and were used to our trip routine. The kids loved everything about their day at LegoLand. I was most surprised by how mesmerized they were by all of the Lego statues and the Lego city.  My son stared at all of those buildings for the longest time – it was so cute. They also loved getting to drive cars by themselves. My son even went on the big roller coaster (my daughter was too short). Regardless, LEGOLAND was the best bribe during our trip.

5. Be Flexible with their Sleep Schedules

At home, our kids go to sleep between 7 and 7:30. On vacation, they stayed up until 8 or 8:30 most nights. We let them watch a couple extra shows to try to wind down from the busy days and it just wasn’t worth it to push a specific sleep schedule on them. We know when they are ready for bed – they start getting really whiny and/or hyper. Most nights, it worked out just fine to adjust their sleep schedule. One morning, they even slept until 7:30 (they are usually up at 6).

My son is the pickiest eater, so we had a lot of trouble going out to eat. Thank goodness I packed a lot of his favorite snacks to get us through the periods of time where he wouldn’t eat anything at meals. Although I hate how picky he is, it’s better to be prepared so we don’t have major meltdowns. 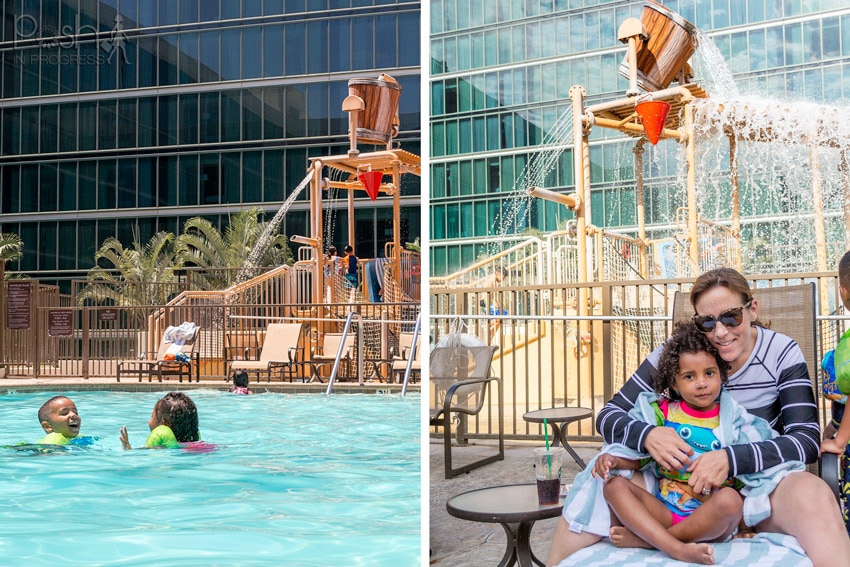 One thing I didn’t build into the trip was downtime. I had planned so many different activities, that I didn’t even consider including downtime. That was a major mistake. By the second day, I realized my mistake, so I built in quite a bit of downtime. When we got to the Hilton La Jolla Torrey Pines, we let the kids swim for a couple hours before dinner. It was one of the most relaxing times for me. Also, it was a great way to get some of their energy out after riding in the car for so many days in a row. Rather than do anything major in Anaheim, we actually let the kids spend the entire day at the Hilton Anaheim pool and they loved it! This was a great reminder that it’s important to have unscheduled play time for kids while on vacation.

It was really important for us to bring their special blankets and stuffed animals. I allowed each of them to bring one blanket and one stuffed animal. My son also brought a couple little cars. During the long car rides, they got happier when they could snuggle up with their blankets and their animals. They provide the comfort when they are uncomfortable.

We had a fantastic time on our road trip, but there were a lot of tantrums and meltdowns that could have been avoided. I’ve learned my lesson about how to have a more successful road trip with kids, so I won’t make the same mistakes again! That’s the thing about parenting, isn’t it? Just when you figure out one stage, they are onto the next!