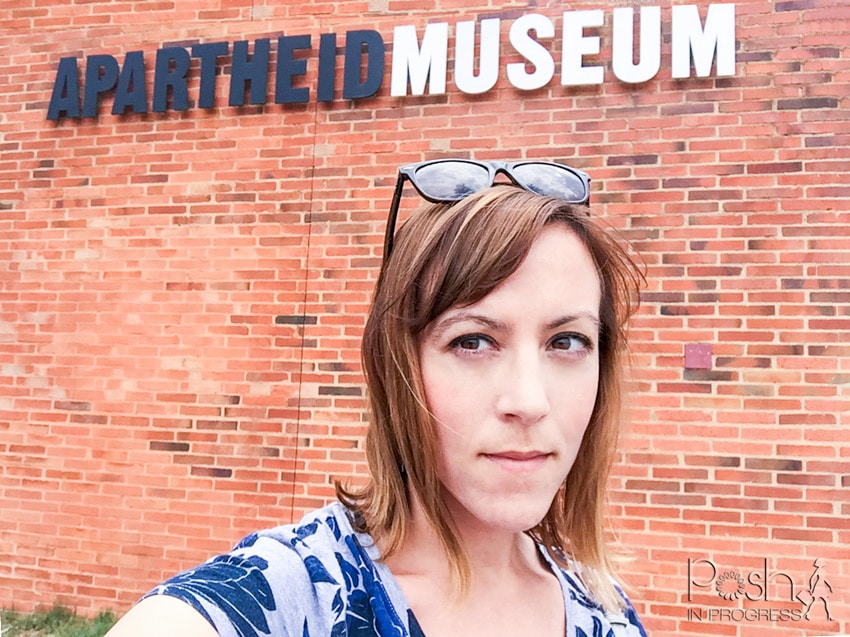 Since it is Black History month, it is the perfect time for me to share my experience at the Apartheid Museum. I also talked about my trip to South Africa here, in case you want to know more about it. Nearly 3 months since I came back from South Africa, I’m still not the same. That trip truly opened my eyes to the ever-present inequalities in society on a global scale. The level of racism and sexism I witnessed in South Africa was disheartening but it also reminded me just how important it is for me to be an advocate for social justice.

I haven’t discussed it much on my blog, but I do have a full-time career outside of this blog that I love. For my day job, I get to visit museums and develop relationships all over the world to help museums implement sustainability education. Over the last year and a half, I’ve visited over 60 museums on four continents. That’s pretty awesome. I’ve seen a lot of beautiful museums, but there have only been a handful of museums that resonated so strongly with me that they led me to tears. The Apartheid Museum was that powerful. 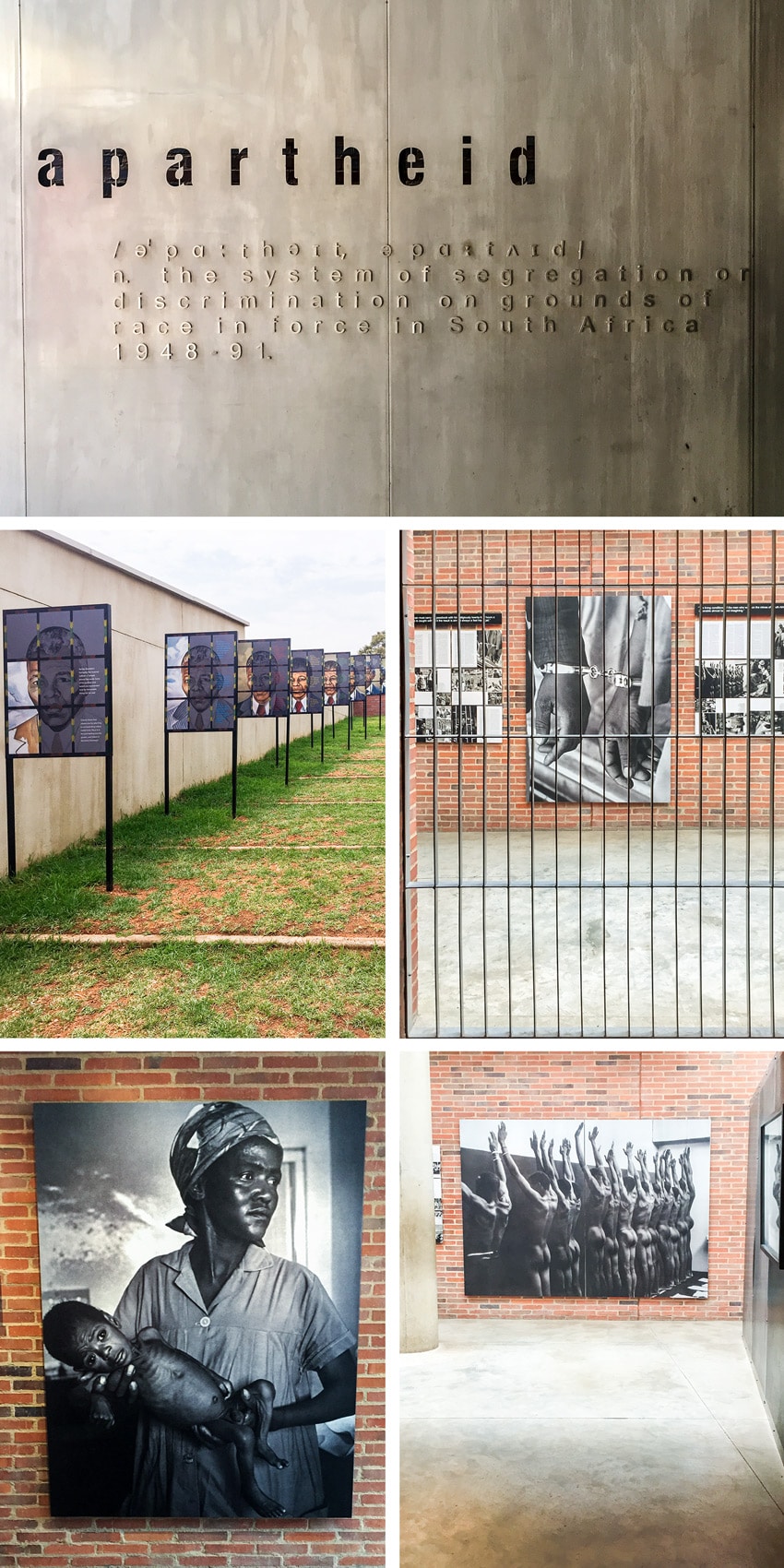 Prior to visiting South Africa, of course, I had heard of the Apartheid and Nelson Mandela, but I didn’t really understand what all of that meant. I knew there were severe racial inequalities, but I did not quite understand the extent of the oppression and the severity of the discrimination in South Africa until I saw it for myself.

When you first enter the museum, you are given either a ticket that says white or black. The tickets are randomly distributed, and I happened to get a white ticket. When you enter the museum, you must enter either the ‘whites only’ or ‘non-whites’ door. As I walked through the ‘whites only’ door, I witnessed several white people voicing their concern over having to enter the ‘non-whites’ door. I could feel their discomfort and unease as they walked through the ‘black and colored people’s’ passage. As we walked through the prison barred hallways lined with signs signaling which groups were allowed, there was tension in the air.

The museum itself is stunning. The way it was curated with mostly black, white and gray signs, very few things in color, it is really striking. All of the signage was equally well-done taking me through the entire history of the Apartheid. I was blown away by the obvious racism, discrimination and systematic oppression of Black people. I was also surprised to learn that anyone who is not white is either classified as Black, colored or Indian. In the U.S. you would never use the term colored, but in South Africa, that is the norm. It was also difficult for me to use the term Black so freely, as my Ph.D. training taught me to only use the PC term of African American (which is of course not accurate in South Africa). 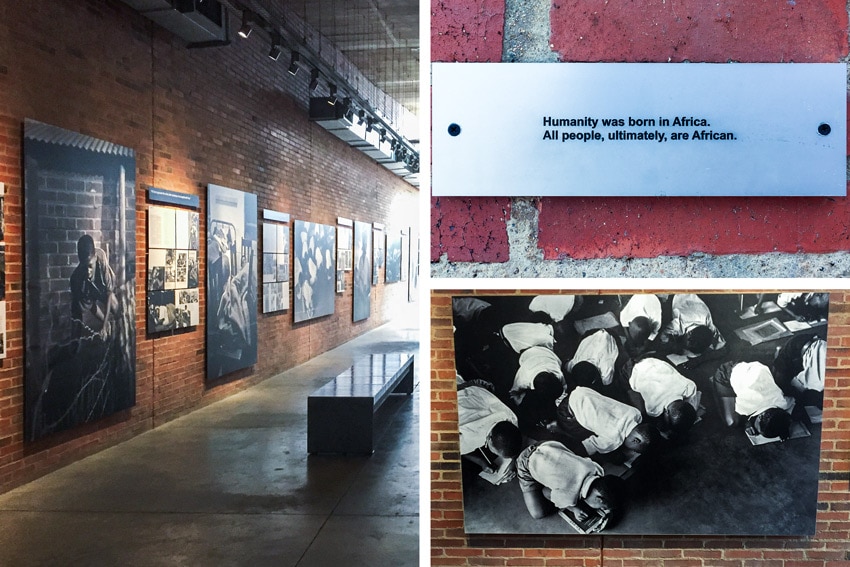 The Apartheid Museum was powerful, and true, and sad, and empowering all at the same time. A few days after I visited, some of the people at my work conference asked me what I did in Jo’burg. When I told them I visited the Apartheid Museum, they gave me a look of disgust. Anecdotally, three different White South Africans had that reaction when I visited. I told them I thought it was a truly remarkable and well-done museum, although they disagreed. I postured why they would have had that reaction. My instinct was that they felt uncomfortable with the portrayal of White power and felt a certain level of guilt over the Apartheid. I, however, think they should celebrate the triumph in the ending of the Apartheid and recognize the significant power they do still hold in South Africa. It is difficult to acknowledge White privilege, but it is clearly alive in South Africa.

A few days later, I had a conversation with an older White South African man about the affirmative action policies in South Africa. He argued that his son, who was a recent college grad in his 20s, was discriminated against because he was White. I tried to convey that the goal of Affirmative Action is to help those who have been historically and systematically discriminated against. He didn’t understand. I even used my husband’s baseball analogy that a White person (often) starts on 3rd base while a person of color has to start from home plate. It’s a whole lot easier to score from 3rd. Despite my best attempts, he could not or would not hear me. I did say that the U.S. context and the South African context of race and affirmative action are not the same, however, there are a lot of parallels between Black people in South Africa and African Americans in the U.S. – despite being free, they do have less access to quality education and wealth.

What was most shocking to me about my time in South Africa was the relative openness of racism and discrimination toward people of color. I also experienced levels of sexism I had not anticipated.

If you ever visit South Africa, I highly suggest you visit the Apartheid Museum. It was mind-opening and reminded me of my privilege as a White person, and even more so as an American.