I received discounted lodging to stay at Beaches Turks and Caicos. All opinions are my own. 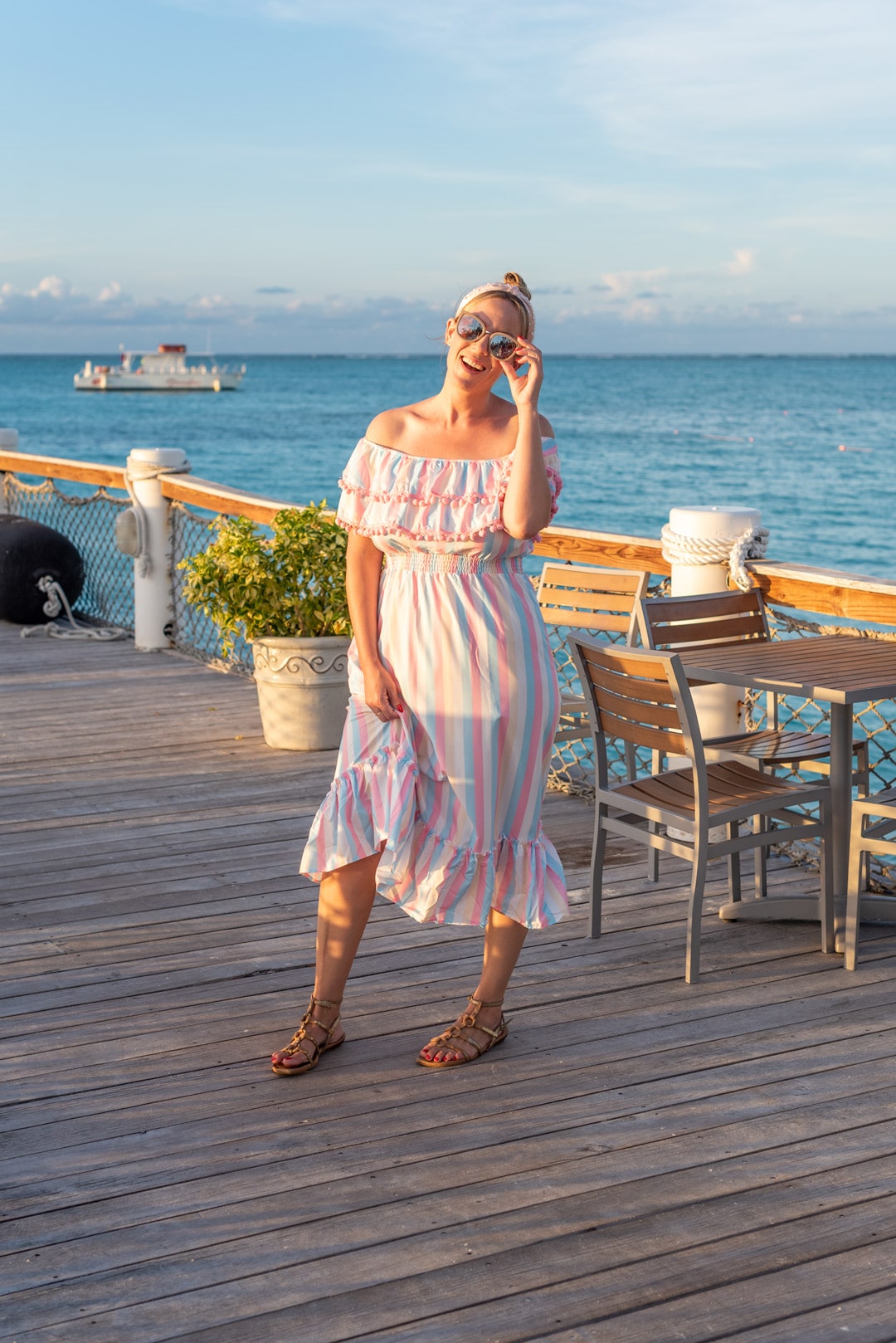 Most of the time, I can pack in 30 minutes or less and I usually nail it. I almost always wear just about everything in my bag, except maybe an extra pair of undies or shoes that I brought ‘just in case’. I’ve traveled all over the world, and for extended periods of time, with just a carry-on.

I didn’t spend much time thinking about what to pack for the Caribbean this time around, because I visited last year. Honestly, I was sure I knew just what I needed. And I did, but this time, I brought wayyy too much of it. Not so much for me, but for my kids. So how much is too much? And what should you pack?

What to Wear on a Caribbean Vacation 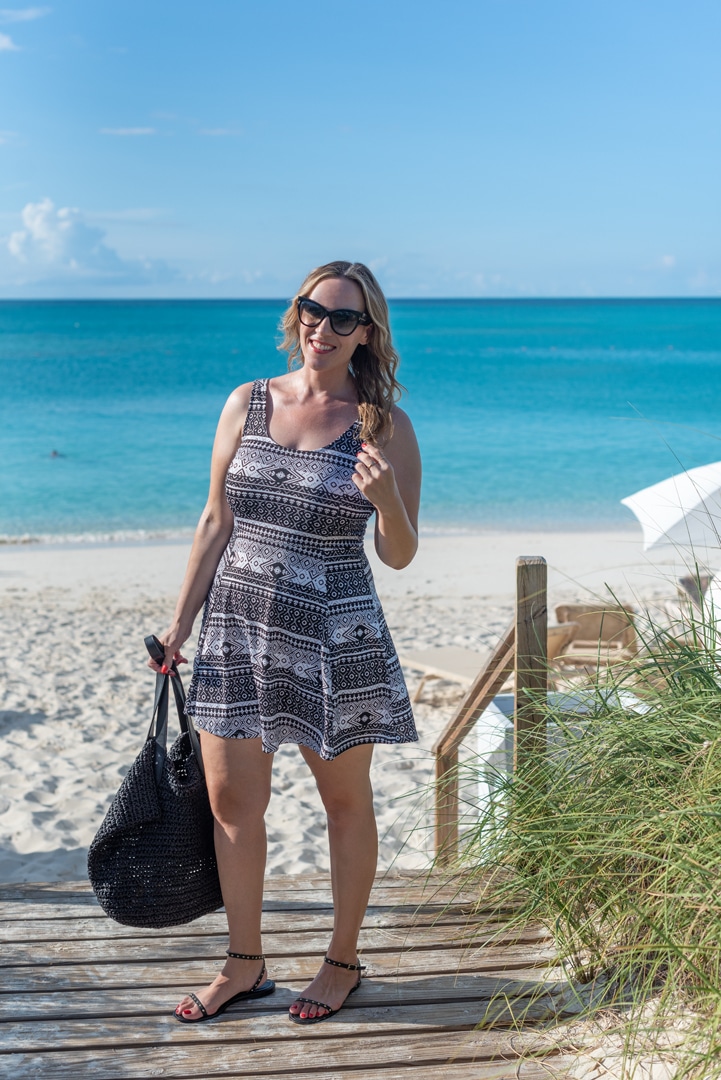 I just got back from the Caribbean yesterday. Even in late October, it is HOT. Most of the year, it is hot and humid, so be prepared. Since we stayed at an all-inclusive resort, there are very little rules or dress code. But some of the restaurants did require men to wear pants for the dinner service.

The other rule that the resort had was that women had to be covered up in certain restaurants. I tried to eat at an outdoor restaurant in a pair of shorts and a bikini top (it was a full coverage sports-bra-style top), and they made me wear a towel wrapped around my shoulders.

The majority of the time, I did wear swimsuits and coverups. The rest of the time, I wore easy and light-weight dresses because it is so hot to wear anything bulky.

As for shoes, you do not need any elaborate shoes. I’d actually suggest flat sandals for the majority of the time. You might throw in a pair of easy-to-wear wedges or heels. The one time I did wear heels I actually felt out of place. Everyone was so casually dressed, that I actually felt like it was over-kill to wear heels. I’d definitely suggest nice flat sandals over heels, for sure.

How to Pack Light For the Caribbean 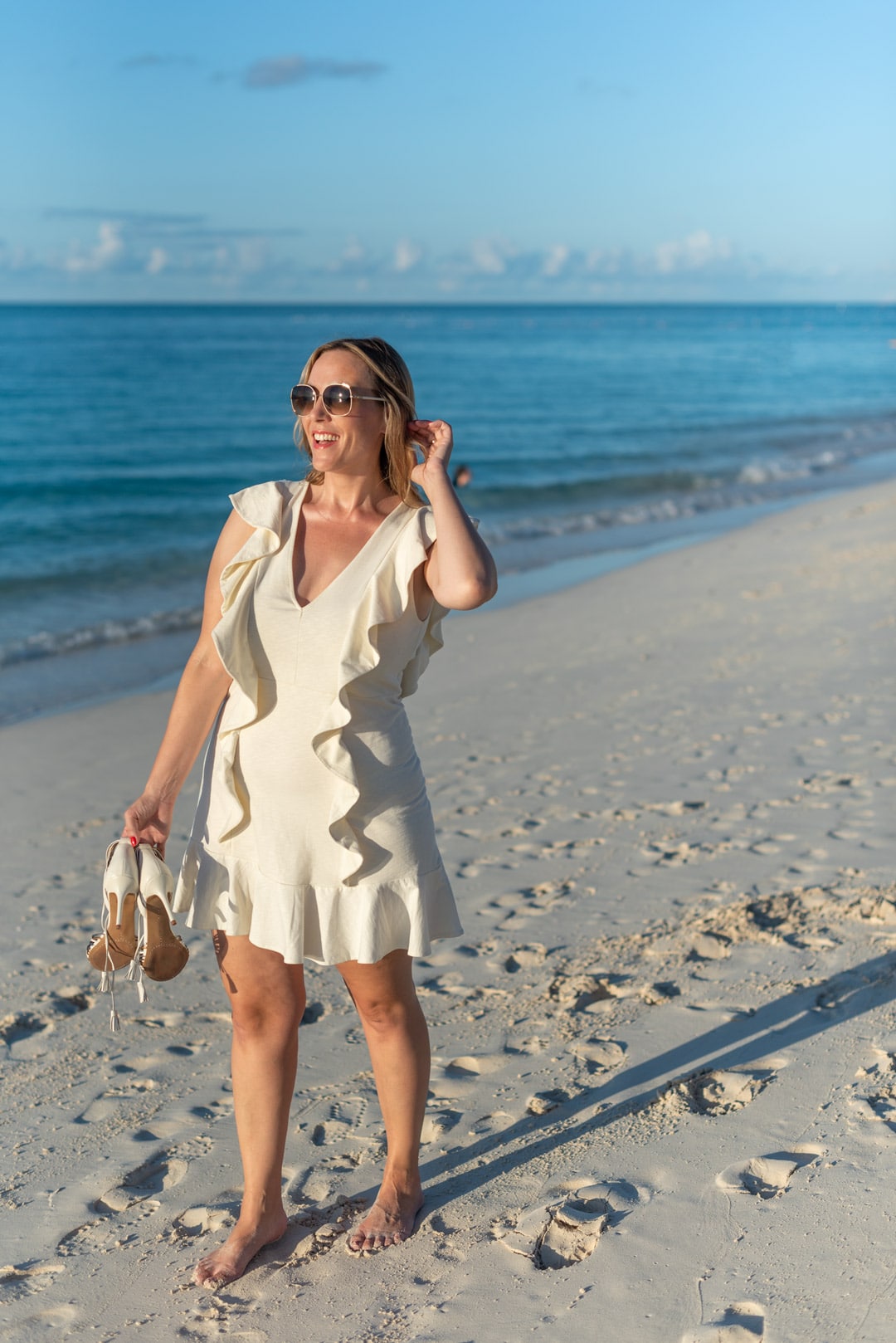 The biggest mistake I made in packing was that I still brought too much. There were a couple of dresses I never wore and three pairs of heels I definitely didn’t need to have with me. As I said, in my experience, the Caribbean is pretty relaxed, so being too dressed up or stuffy, it’s just unnecessary. Although it is hot, you may also find that you re-wear certain items. I happened to wear two dresses more than once because they were the perfect light-weight and breathable material for the hot and humid weather. I opted to wear the same thing more than once rather than wear something that wasn’t as comfortable for the climate.

I would over-pack for swimwear and coverups and under pack for anything else. Especially if you are going to the Caribbean for a beach vacation, you won’t be wearing much else. I actually did bring too many suits (I think I brought 7 for 7 days), but I wore most of them. There were a few days I re-wore the same suit, just because it was my favorite.

You really don’t need much bulky clothing, so I do think it’s entirely possible to do just one carry-on bag when you’re considering what to pack for the Caribbean.

What to Wear on the Plane to The Caribbean 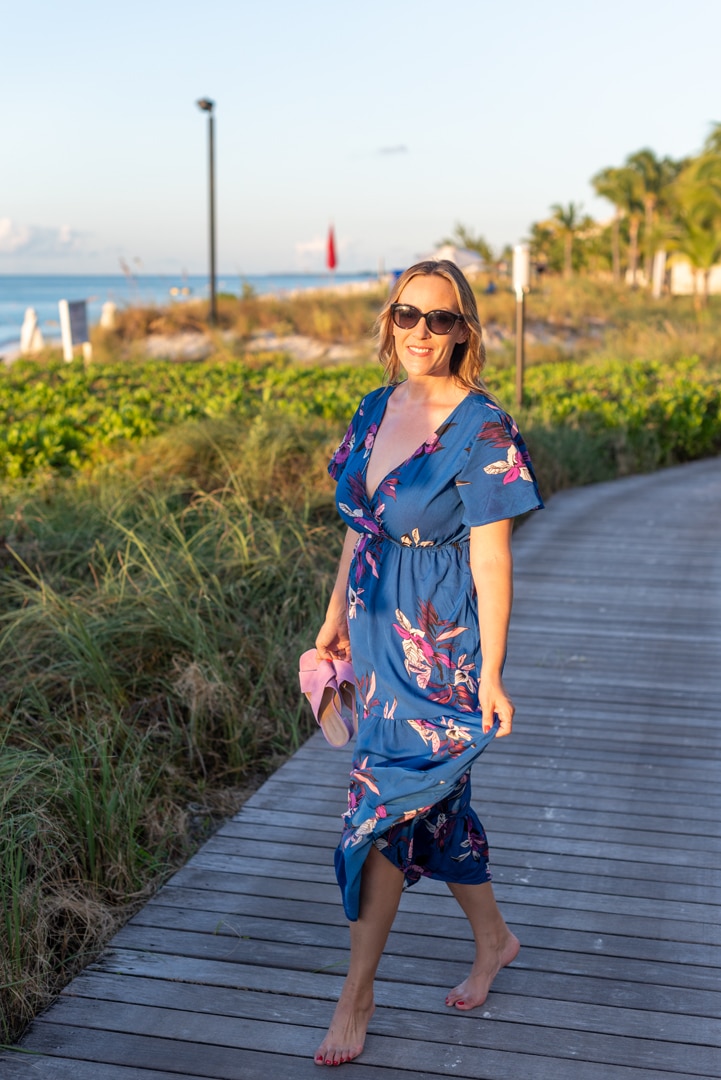 As for the plane ride, I opted for stylish jogging pants, a cute and comfy t-shirt and a denim jacket. Planes are notoriously cold, so you will want at least one layer. The denim jacket and the pants stayed in my hotel closet the entire trip, but I did wear the same outfit to Turks and Caicos and on my way back to LA. Its the perfect stylish, yet comfortable, travel outfit.

If you’re bringing your kids with you, I would highly suggest that you pack a bottle of sunscreen for every 1-2 days. I  brought three bottles with me, thinking that would be enough for the week. It wasn’t. I went through an entire bottle in one day. Lucky for me, the Coola sunscreen company was one of the event sponsors, so they provided me with additional bottles of sunscreen.

The other thing I would pack is at least two pairs of flip-flops or slides. The first day my son lost one of his slides at the pool. Luckily, we did find it later in the day. But while it was lost, I was frantic to figure out how to get him another pair. It’s not appropriate to wear sneakers at the pools – just for the difficulty of getting them on and off and also because I didn’t want them to get wet. 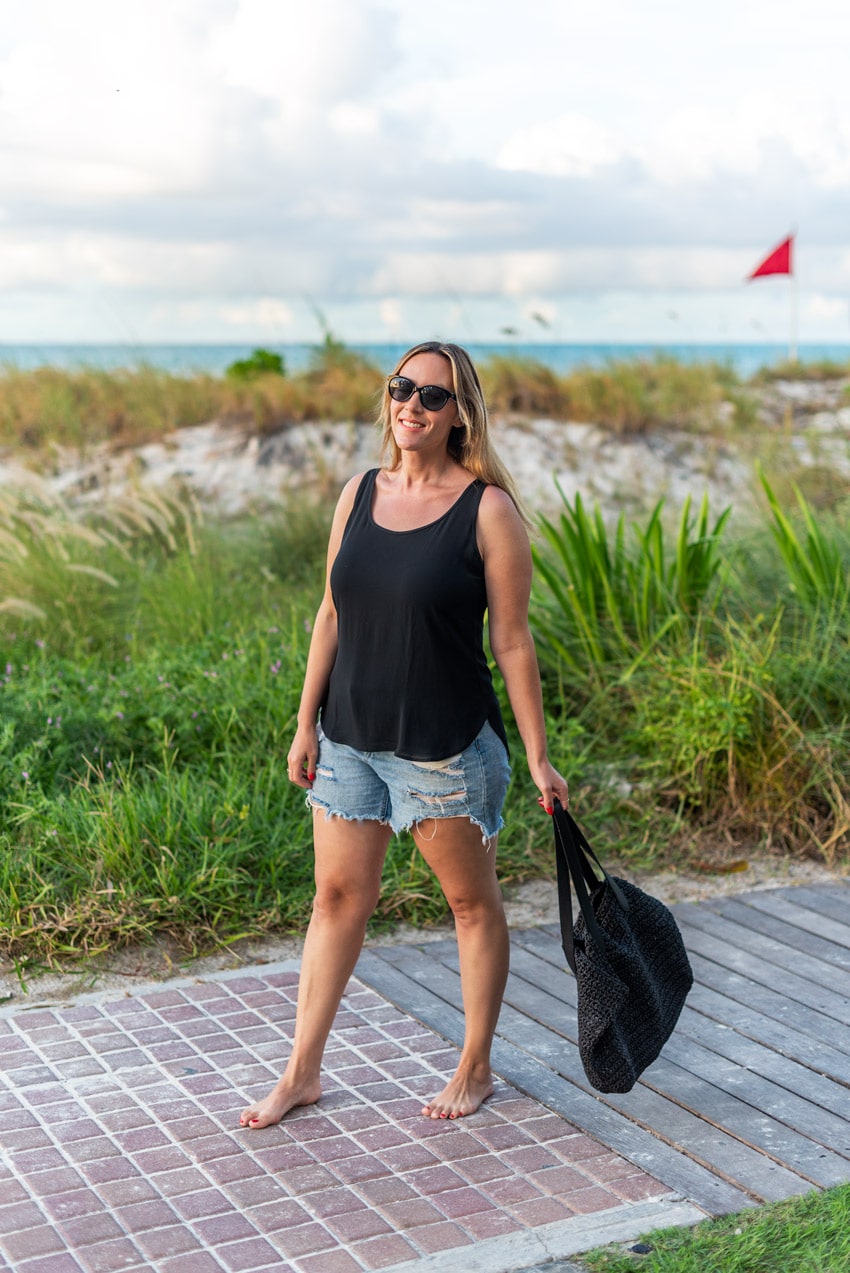 I’d also suggest packing at least 3 swimsuits for each child. Our kids swam every day, at least two-three times a day, so it was so convenient to have several swimsuits. Our resort provided towels, so we didn’t have to pack those. If the place you’re staying doesn’t provide towels, I’d also suggest packing at least two towels per person. It might actually be smart to just buy them when you arrive as not to take up so much room in your suitcase.

I found it most convenient to pack several pair of easy on-and-off shorts for both kids so they could wear them over their shorts. I also packed a few rompers for my daughter, as they are easy to put over a swimsuit and easy to get off if she needed to use the bathroom.

As I mentioned above, some of the restaurants at the Beaches Turks and Caicos resort did require men to wear pants for the dinner service. Thus, it would be important for men to pack at least one pair of pants. My sense is that the pants don’t need to be that dressy, casual pants should be fine. They just didn’t want shorts.

All of the same rules for a man’s packing list would be the same tips as I’ve mentioned above. You want to prioritize swimwear and don’t worry about having anything too dressy or stuffy. Light-weight, breathable clothing is best. I also noticed many of the men did wear swim shirts and I think that’s a smart idea. The sun is so hot and I did see so many people with sunburns. Swim shirts are a great way to avoid bad sunburns.

Overall, I think I did an OK job of packing for this trip. I definitely did overpack, especially for my kids. In the future, for myself, I’d drop the heels and find one or two more light-weight, flowy dresses to bring with me. Otherwise, I’m really happy with how the trip went and I think I’ve finally learned what to pack for the Carribean.

« What is Social Media on the Sand For Beaches Moms?
Here are the 5 Reasons Beaches Resorts are Kid-Friendly »

#ad One of my favorite things about living in Cali