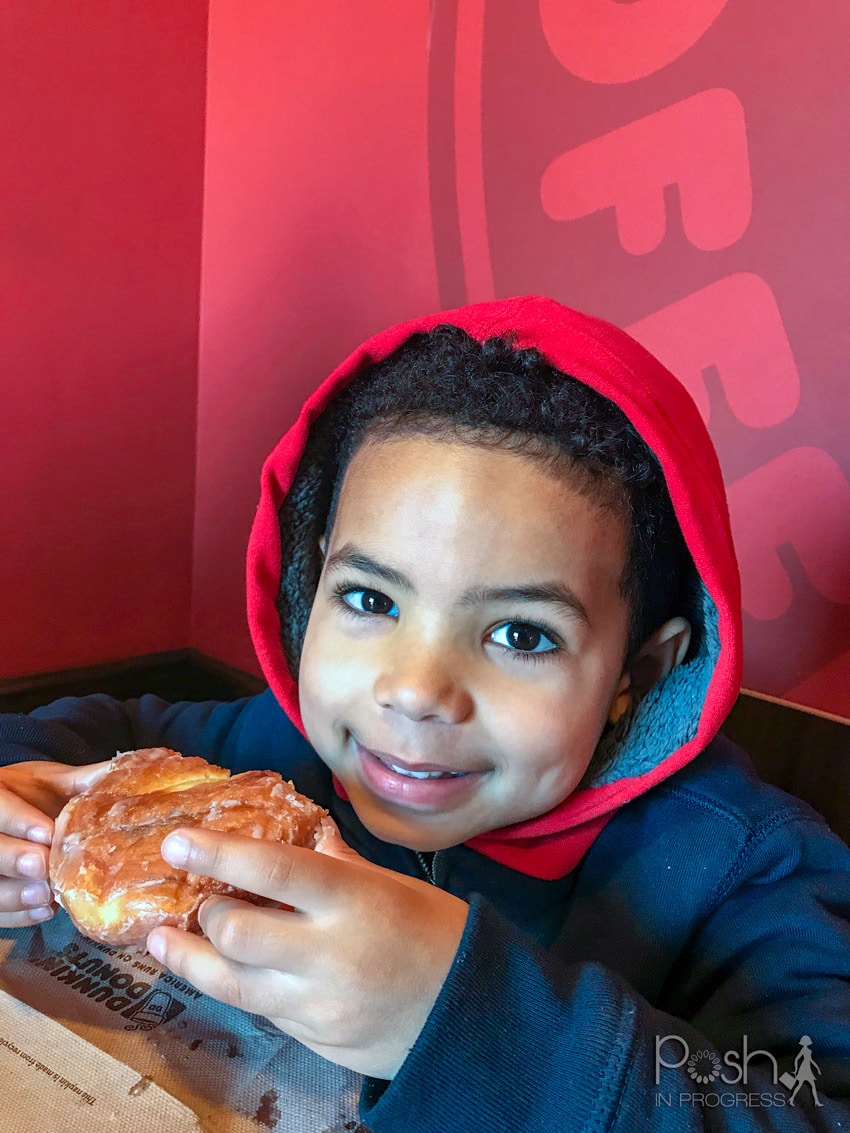 Despite our best efforts, our son is a super picky eater. He has been since he was an infant. He didn’t even want to eat solid foods for the longest time. I really thought being a picky eater was a phase, but my son has taught me some people are just pickier eaters from birth.

Case in point – our daughter, who is 15 months younger than our son, will eat almost anything. There are a few things she doesn’t like, but the list is a whole lot shorter than our son’s.

We have tried everything to get our son to eat a variety of foods, but if we let him, he’d eat chicken nuggets, French toast sticks, and apple sauce at every meal. There are a few things that have worked though, so I’m sharing my 9 tips for dealing with young children who are picky eaters.

9 Tips for How to Get a Picky Eater to Eat

It can be very overwhelming for a picky eater if you give them something large and tell them they have to eat the whole thing. We’ve tried to focus on ensuring our children at least try 1 or 2 bites. This trick has worked extra well for us to get our kids to try new foods. The act of one small bite makes it feel more approachable and easy to accomplish. Plus, if they absolutely hate it, they don’t have to have any more.

This tip has worked really well for us. I even got my kids to eat salmon with this technique. If you’re trying to get your kids to eat more veggies or other really unfamiliar foods, then I think this technique works very well.

Even if they don’t want more than one bite, and say they don’t like it, you have to keep trying. Many people say that it takes 10 to 15 times before a child can decide if they like a food. I know it can be really painful to go through preparing something 15 times, only for them to turn their nose up at them. It’s super frustrating – I’m with you! But we have to stay strong, and keep trying.

One technique I use is to give them only one new food per meal. I will give them things I know they love and then add one thing they haven’t tried yet. This technique usually works fairly well because they can eat all the food their comfortable with first and then try the one that they are less certain about.

3. Cut Back on Snacks

If you have a preschooler, I bet you have a closet full of snacks. I’m guilty too. My pantry is full of little mini crackers, chips, fruit snacks, all these tiny little things our kids love. I try to sneak in healthier versions of the snacks they love, but puffed corn still isn’t the same as a carrot.

I’ve been trying to cut back on snacks so my kids are hungrier at the main meal times. I don’t withhold snacks, or suggest you do, but I do think sometimes we overfeed our kids with snacks and should focus on meals instead.

One idea would be to start slowly and remove one of the snacks, such as a morning snack, and instead, offer them a bit more at breakfast or lunch that day. If that doesn’t work, no worries! Our kids do burn a lot of energy, so we don’t want them to go too hungry either. However, just watch and make sure you’re not overfeeding them between meals.

I remember when we first started feeding our son solids, it was so frustrating. There are many days, still, when I’m very frustrated that he’s completely unwilling to try even a bite of something like a blueberry. I’ve definitely said things like, ‘we wouldn’t feed you something that would hurt you’. It can be beyond frustrating, but you just have to be patient. I remember one time I was at the grocery store and this mom with older kids heard me having a conversation with my kids about trying some new items. She heard my daughter enthusiastically willing to try it and my son’s unwillingness. She told me not to sweat it. She said, ‘let him have mac and cheese and chicken nuggets, he’ll grow out of it’. I do hope so. My nephew was also a pretty picky eater and he has grown out of it, so there’s hope!

Peer pressure is a real thing! I definitely noticed my son became more willing to try new things at his last preschool because they served them lunch as a group. That peer pressure, sitting at lunch with his peers being served the very same thing, it forced him to try everything and become less picky. Unfortunately, our new preschool doesn’t serve lunch so that added peer pressure isn’t present anymore. Luckily though, our daughter is much more adventurous, so it helps that she’s willing to try things.

Do not reward progress with dessert or food related rewards, but do praise your child for trying new things and eating healthy foods. I spend a lot of times talking to my kids about healthy foods and sometimes foods. I don’t want to make food good or bad, but I do want them to understand they should not eat sugar every day or have cake every day. I want them to understand that fruits and veggies and meat and other healthy foods should make up the bulk of their diet and that good nutrition will help them grow up big and strong. Thus, when they try a healthy food, I tell them I’m proud of them. It makes them feel good and hopefully, this positive reinforcement will lead to more progress.

I’ve read a lot of studies about the importance of eating as a family. Intuitively, it makes a lot of sense. When your kids see you doing a behavior, they want to mimic it. Remember, they are taking in everything that you do, learning about the world around them and trying to be just like you (at least for now). If you enjoy fish, they are going to (at least) want to try fish. If you have broccoli, they are going to want to try it.

This trick has totally worked in my house. Just last month, I cooked two salmon fillets while my kids at their standard kid fare (probably chicken nuggets or tacos). I planned on having one the next day for leftovers, but my kids asked if they could try it. Although I was shocked, of course I said yes. To my utter shock, they absolutely loved it. I ended up giving them each half of the fillet and they gobbled it up. Now anytime I make salmon, they want some. Just last night, I made blackened salmon and they asked to try it. I warned them it was very spicy, but they said they liked spicy food. Once again, they totally surprised me.

It is a fallacy that all picky eaters want bland food. My son actually loves crunchy foods, but doesn’t like wet foods. I haven’t quite put my finger on his textural issues, although I know there are others. So the point is, you don’t just need to feed them applesauce and white bread. Try other things (i.e. blackened salmon). There is a whole world of food out there, so don’t assume you know anything.

If your child loves chicken nuggets, the next step would be to try other types of chicken. Maybe you can try wings and then grilled chicken strips to try to expand the types of chicken they will eat. It’s much easier to go from chicken nuggets to wings than chicken nuggets to steak. Same goes for a food like French fries. If they like regular French fries try giving them sweet potato fries or zucchini fries next. Or if they love peaches, try mango next. It’s important to gradually build on prior successes with similar foods rather than constantly throw exotic things at them.

These are just some of the ways we are working to battle our picky eater. It’s definitely not easy, it takes way more effort than I’d like, but it’s ultimately important to me that my son grows up to love and appreciate a wide range of foods and flavors.